Map by “Shannon1,” via Wikimedia

What goes around comes around?

It was one of the defining battles of the early environmental movement: would a dam be built across the Hetch Hetchy valley in Yosemite National Park in the early 20th century in order to provide water for post-earthquake San Francisco? Sierra Club founder John Muir, appealing to President (and outdoorsman) Theodore Roosevelt, advocated that the valley should be preserved in its natural condition. In Roosevelt’s other ear, conservationist and founder of the National Forest Service Gifford Pinchot supported “wise use” of resources “for the greatest good for the greatest number in the long run.”

Muir, on the other hand, wrote “”It is impossible to overestimate the value of wild mountains and mountain temples as places for people to grow in, recreation grounds for soul and body. They are the greatest of our natural resources, God’s best gifts. . . .”

In this schism between environmentalists, Pinchot won and the dam was built. To this day, preservationists want the dam removed. The real loser, they would argue, was nature.

The Hetch Hetchy Valley before and after the dam. Images via Wikimedia.

Well, 100 years later maybe it’s time for payback. A huge fire is currently out of control in Yosemite, and California has declared a state of emergency not just for the immediate area, but for San Francisco, 140 miles away. The reason? The city’s electric and water supplies may be in jeopardy. 85% of the city’s water comes from the Hetch Hetchy Reservoir, which may get contaminated with smoke and ash, and, furthermore, there are major electrical transmission lines in the, um, line of fire.

I haven’t read whether the cause of the fire has been determined, if it was natural or human, or whether forestry policies contributed to its spread.  But the potential irony is there. Muir and nature may have lost the initial battle, but the war – which is how some still see our relationship to nature – is far from over, and nature, provider of oxygen and water and a few other life essentials, holds a stronger hand than we do. One wonders how long that “long run” of Pinchot’s wise use is. 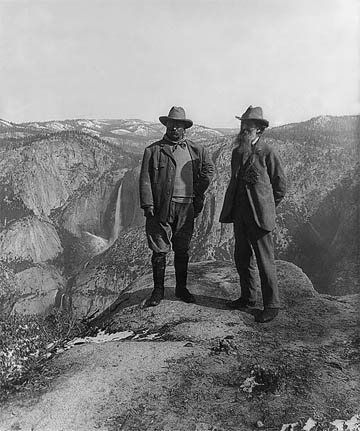