Virtually in the shadow of the Unisphere and directly adjacent to a display of actual NASA rockets, the NY Maker Faire set up tents, tables, robots and fire-breathing dragons this past weekend. While the task of grading 50 student essays kept me tied to my desk, I did attend last year’s Faire and marveled at the diversity and inventiveness of the creations.

The whole maker movement – and the NY Faire represents only a tiny fraction of the group which could be said to include DIYers as well – presents, I think, an interesting dilemma in the context of environmentalism.

On the one hand, there are those greenies who promote what has lately come to be called “resilience” – the idea that we need to be able to adapt to and survive in a future that may include major climate changes, resource shortages and food scarcity. One way to do this, they maintain, is by becoming more self-sufficient. This would engender being able to, as individuals or communities, grow more of our own food and make more of the things we need. Those trained in resilience would make good candidates for a remake of Lost or for the current TV series Revolution, set in a near future in which nothing electric works.

Implicit in self-sufficiency is the notion that we should (or must) own fewer things, that we have to become less materialistic. I have no argument with that even though it connotes the unpopular concept of sacrifice and equates environmentalism with giving things up, which might at first be seen as not in keeping with the concepts of EcoOptimism. But as has been observed by many, materialism – once one is past the point of having necessities – does not add to happiness.

Much of Maker Faire, as well as a rapidly growing new industry, now revolves around 3D printing. As you might surmise, 3D printing is the capability of “printing” 3-dimensional objects. The technology is evolving incredibly fast and what, only a few years ago, required a commercial stove-size piece of equipment and a sizeable investment, can now be accomplished, in some cases, by something not much larger than a home microwave and around the same cost as a decent refrigerator. (I’ve no idea why this became a comparison to kitchen appliances.) 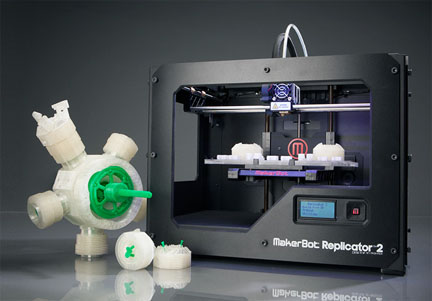 In fact, the technology is bringing us that much closer to Star Trek “replicators.” One can now input a 3D model computer file instructing the machine (the popular available one is called a MakerBot) to print a piece of intricate jewelry made of stainless steel, a replacement part for your car – or a recipe. It’s not quite that advanced yet – don’t expect a soufflé – but just a few years ago, the only things you could output were objects made of plaster-like materials. The media – the “ink” – available now includes metals and even organic matter to make meat. 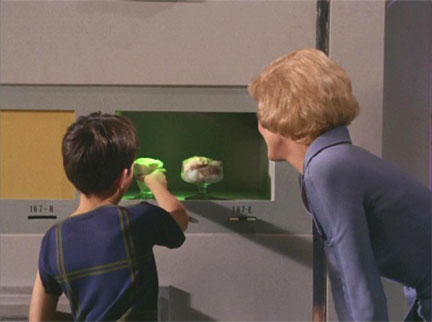 Clothing aside, I could see this shot from Star Trek as an ad in a mid-century (20th, that is) magazine. (Image source: 3dprinterreviews.blogspot.com/2011/04/star-trek-replicator-roots.html)

There is great EcoOptimism potential in this disruptive, as it’s termed, technology. It will enable us to make virtually anything anywhere on demand. That funny shape screwdriver you need to open your iPhone? Well, you’ll no longer have to special order it from somewhere halfway around the world. (Predictably, one of the major markets for 3D printed objects is iPhone accessories.) You will download the 3D file (or if you’re really handy, create it yourself) and then print it out perhaps in your garage or your home office, or if it’s a larger piece than your printer can handle, have it sent to a Kinkos-like service in town. Resources will be saved (stores wouldn’t have to stock – or overstock — things), less transport energy will be incurred, more things may be repaired rather than thrown out. And the whole process of design and fabrication should become more accessible and egalitarian.

But there’s a potential conflict here between the environmentalist goal of being less materialistic and the increased ease with which we’ll be able to make things. That conflict is analogous to the non-appearance of the predicted paperless office. The reality turned out to be that it was so easy to print things, in multiple drafts and widespread copies, that people ended up going through vast reams of paper even more than before.

Suppose, in our 3D printer world, you feel like you want a new salad server set for your dinner party tonight? Just print one out. Want a different color earring to match your (newly printed?) hat? You might have it printed and on your ear in an hour or so.

In fact, MakerBot is opening a store near me in few weeks. Will it be full of things I didn’t know I wanted? Will it enable me to make things that I couldn’t previously afford because it would have been too expensive as a one-off? Is that a good thing or bad? (Hint: it’s both.)

An architect friend of mine, with whom I often have, ahem, political differences, says the most important people around are “Makers of Things.” The service economy? Not for him. Unsurprisingly, I’m not convinced he’s right. For one thing, I’m not sure that self-sufficiency is that great a goal. We’re far past the point, barring apocalyptic events, of returning to rural agrarian living. It’s more likely that we will see major increases in the costs of energy and transportation, to the point where we will choose or be forced to make changes in how and where we make things. 3D printing raises the possibility of removing much of the transportation costs and perhaps even encouraging making things differently in different parts of world (as we used to before globalization).

But is it a problem that it will also make it easier to satisfy immediate desires, to make or buy things as we, perhaps impulsively decide we “need” them? We already shop and acquire too impulsively. Perhaps 3D printers need to come with an admonishing voice that says, in a HAL-9000 tone: “Just what do you think you’re making, Dave?” 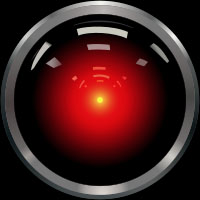