I was looking at a photo of an old telephone the other day – one from before cellphones and even before cordless phones. It was a classic Henry Dreyfuss table top phone from the days when Ma Bell – the original AT&T – was the only game in town and, for that matter, the only game in the entire country. The phone model choices back then were only slightly better than Henry Ford’s policy of allowing customers to “have a car painted any color so long as it’s black.” Slightly better because you could, in fact, get this phone in an assortment of colors and in three styles. (Remember the “Princess Phone?”) 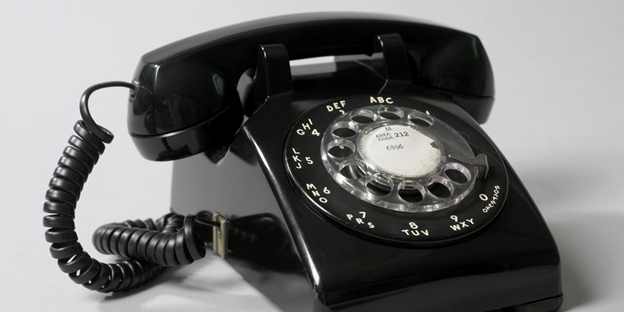 But that’s not my point.

Back then you didn’t buy a phone. When you got a phone number and account for your home, it came with a phone, or maybe a few. They were sturdy things, well-made and designed. They almost never broke and, when they did, all you needed to do was tell the phone company and they would come over and either repair or replace it. At no charge, if I recall correctly.

Our kitchen table phone once stopped working. The repair guy came out to the house, pulled the top off and water came pouring out. One of my little sisters, you see, had decided it was dirty and needed cleaning – by pouring water over it.

That memory may have become slightly embellished over time, but the point is that the telephone guy replaced it. No questions asked. Imagine Apple or Samsung doing that. He just unplugged it. (Actually, I don’t think they were attached by plugs back then. The wires were screwed into the wall jack.) And then just attached a new phone. More likely it was one that had been repaired, but just looked new. It didn’t matter; it worked.

Here’s the real point. Could this old-fashioned system make more sense than ownership? There’s a good case for this from both the consumer and manufacturer points of view, and environmentally as well.

I don’t even want a car. I want mobility. And ideally I want to be able to get around with different types of cars for different tasks. Some days a bigger car to carry a lot of stuff and maybe some friends, but on other days it’s just me going a short distance.

I realize my needs are undoubtedly different from someone not living in a city. But as a city dweller, I was overjoyed when Zipcar came to town and I could get rid of the clunker city car I kept for occasional errands and excursions, and whose insurance and maintenance were ridiculously expensive for the little bit of driving I did each month.

This is all part of the “sharing economy.” An old example of this might be a laundromat. A newer example is Zipcar. Newer still is the concept of “tool libraries.” A few years ago, a study found that a cordless drill purchased by a consumer had an average usage time of under 10 minutes. Typically, someone went to a hardware store to buy one, maybe to hang some shelves, and then the drill spent the rest of its life in a closet. Hardly a good use of either money or materials. An answer to this gross inefficiency is being able to go to a tool library and check out a drill (or a circular saw or a tall ladder) for a few days. 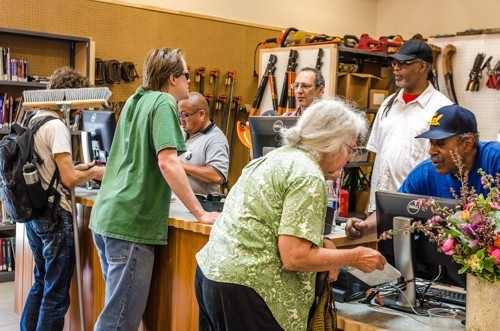 You might complain that it’s inconvenient to have to go that library for a ladder. But it’s also inconvenient to go to Lowes or online to Amazon, select which one you want, spend a hunk of money and then store it as dead weight for most of the rest of the time.

On an entirely different level, this is beginning to happen on a commercial scale. There’s even precedent. Back when copiers were big, expensive and prone to breaking down, offices usually didn’t buy them. They rented or leased them from Xerox or a competitor, who frequently charged them by the copy. Maintaining it was Xerox’s problem, not the office’s. (Which was a good thing because they broke down a lot.)

Philips Lighting recently signed with Amsterdam’s Schiphol Airport to provide “lighting as a service” rather than the more typical method of selling light fixtures and bulbs. For the airport, this means that not only do they not have worry about maintenance, they also will always have state-of-the-art lighting. What’s more they won’t have to worry about how to dispose of it later on.

Therein lies one of the not-so-obvious environmental benefits. Because Philips retains ownership of the lighting, when it comes time to replace it for remodeling or demolition, they will have to deal with its end of life. That means they will need to design that in – how the lighting can be dismantled for least cost recycling or reuse. Previously, when they sold the lighting, they didn’t have to be concerned with the end-of-life. It was someone else’s problem.

Imagine now that this was true for all your electronics – that Dell or Apple or Samsung had to take it back when you were done, and then had to deal with disposal. Suddenly, they’d be concerned with how to design so that products could be easily taken apart. And, by the way, that would also pave the way for easier repairs, which the company would be interested in since repairs and maintenance would be their responsibility.

But how does such a company make money in this arrangement? Yes, they lose the sale, but they gain a stream of income as their customers effectively rent instead of buying. And that stream of income is steadier, more predictable, less susceptible to the ups and downs of the economy.

True to the ideals of EcoOptimism, it’s a win-win-win deal.

Here are some things I’d rather not own, but still want to use:
Cellphones
Computers
Anything else that quickly becomes outdated technology
Anything that requires a lot maintenance.
Cars
Home Appliances
Homes
Formal Attire (I’m lucky to have a hand-me-down tux, but if I didn’t…)

Spied at Parsons School of Design: 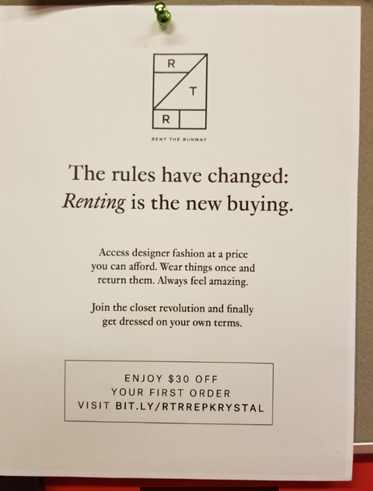