In a post a few weeks ago, I discussed why environmentalism is not a topic in the election, and why the public doesn’t seem interested. I wrote: “… the public lack of support is, in part, a Catch-22. Politicians don’t put it on their agendas because they are told people aren’t interested. Then people think it’s not important because no one is talking about it. This is what’s known as a positive feedback loop. Too bad its effect isn’t so positive.” (Is it bad form to be quoting myself already?)

Well, it turns out there is somewhat more positive news out there. A new study from the Yale Project on Climate Change Communication investigated what the effect would be on a candidacy if the candidate were to come out in support of climate initiatives. Surprisingly, their finding is voters do want to hear views on global warming and that such a stand would benefit candidates more than it would hurt them. Even more surprising, Republican candidates would not lose votes overall. The study found:

So, what’s going on? Why the difference between the common political “wisdom” and these findings? “80 percent support action to reduce global warming, even if it has economic costs,” the study reports, but that’s different from what we hear elsewhere, and way far different from what that political wisdom believes. 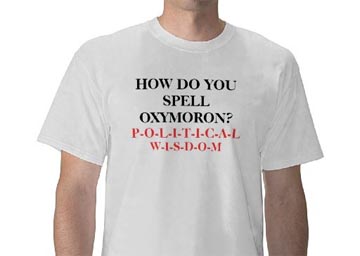 Yes, it’s a cheap shot and I lifted the image from a Tee Shirt site.

The explanation, of course, lies in where the money and influence come from. No new news there. And it still leaves us with the question of how to balance that undue influence. Maybe with better slogans? That might be a start at least.

There’s a lot of other interesting info within that Yale study. One that particularly grabbed me was this chart: 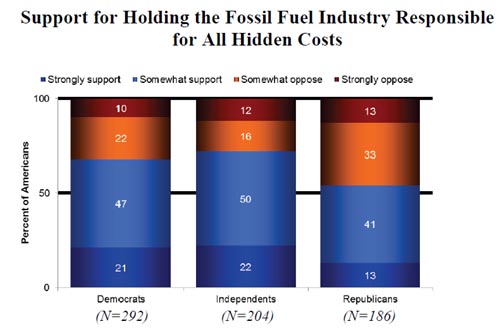 Though the title reads like something only a policy wonk would be interested in, its implications are significant. Among other conclusions, it says that more than half of Republicans (and of course higher percentages of Dems and Independents) believe that oil companies should be responsible for hidden costs. In my post “Where’s the (true cost) in beef?” I discussed “true costs” and externalities, both of which are similar to “hidden costs.”

According to that chart, somewhere around 60% – 65% of voters support true costing of oil. Stands to reason, then, they should support carbon pricing. Yet mention of any kind of carbon pricing, whether it’s called a carbon tax or cap-and-dividend, falls into the black hole of politics.

It’s a disconnect, obviously. “We like this idea,” polls indicate, but not when you call it something else. Which brings us right back to the issue of communication and EcoOptimism. A lot of people have been concluding lately that rational or scientific explanations and arguments do not work in the public sphere. With that in mind, I’m very curious to read the new book Language Intelligence: Lessons on persuasion from Jesus, Shakespeare, Lincoln, and Lady Gaga. 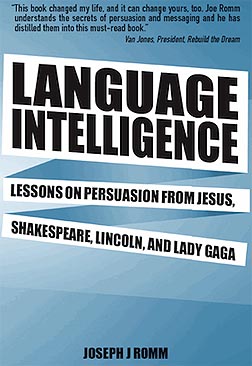 It’s written not by a semiologist or a political flack, but by the head of ClimateProgress and claims to “reveal the secrets of the world’s greatest and most memorable communicators.” If a climate wonk like Romm can help us find ways to more effectively get “the word” out, then we may have solved a significant part of that disconnect, and be better able to make the case for EcoOptimism.

1 thought on “How wise is political wisdom?”