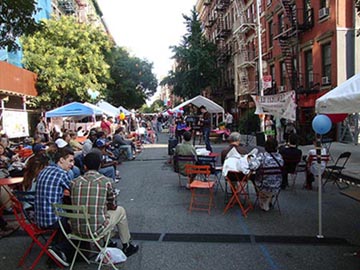 The US federal government is broken and international agreements, it seems evident, are not about to happen any time soon. How then can global problems like climate change and pollution be tackled?

The ineffectuality of large-scale top-down governments, at least as they currently exist, leaves us with two possible, non-exclusive routes: a bottom-up popular approach and, perhaps counter intuitively, a corporate driven approach.

We see some evidence of the latter, albeit not nearly enough, in programs from Walmart and a few others to enforce environmental requirements on their supply chains, and in the growing endorsements by some energy and related companies of some form of a carbon fee. This business world trend, which is occurring in spite of the oversized voice of the US Chamber of Commerce, is a very positive sign in that it exposes the knee-jerk claims that a carbon tax would be a job and economy killer.

But I want to concentrate here on the other option, creating public demand for environmental thinking and responsibility, because this is potentially the most likely route to both engaging public support and, by extension, electing governments that respond to that demand.

“Resilient communities” has become a major theme in environmentalism. The basic concept is to create ways by which communities can prepare for and respond to disasters, natural or otherwise, with less reliance on others, including national governments. It’s a fine goal (though it won’t and isn’t intended to obviate the need for wider scale programs). But the concept ignores a first step that is both necessary and desirable: before you can make a community resilient, you have to have a community.

I started writing about this topic in the post Community and Sustainability. My basic premise is that neighborhoods that don’t have a sense of community, almost by definition, are not conducive to fostering individuals’ interest in topics or problems with impact beyond their own self-interest.

Living (or working) on a block or in a neighborhood where anonymity is the rule discourages any sense of ownership, of belonging to something larger than just you. Simultaneously, this means you have less incentive to participate and less sense of responsibility to a community. This can contribute to any number of “quality of life” problems like noise and littering. If you don’t know your neighbors, you’re less likely to care.

A starting point is asking why, in so many places, it seems we don’t have strong communities. Though it may be partially a product of nostalgia, we commonly hear that communities used to be more important and more central to people’s lives. Reasons for this abound, ranging from the trend away from extended families living in proximity, to fewer stay at home moms (as was the social and economic norm back then), the loss of local coffee shops and watering holes and, of course, the advent of the Internet. The common factor in all of these is that there are fewer places and occasions for in-person interaction: fewer places to meet your neighbors, fewer chances for unplanned exchanges.

I’ve been pondering this while looking at current and proposed developments here in NYC and elsewhere, and comparing them to urban streets like my own. New urban apartment buildings and their streets bear little resemblance to the low-rise walk ups on my block. Aesthetics aside, there is a huge difference between a block-long building containing a hundred or so apartments entered via a single massive lobby, and a series of varied buildings with each with a dozen or two units, with entrances (perhaps on those quintessential gathering spots called stoops) every 25 feet or so. Add to that the difference between streets lined with a combination of generic large chain stores with ubiquitous bank branches versus smaller local businesses run and staffed by people in the community.

As I’ve been emphasizing in several recent posts here, particularly Towers in the Block and the series on density, we need a re-envisioning of design, both urban and suburban, with an eye toward community and livability. We need to reinvestigate the older ways of fostering community and devise new interpretations that take into account increasing density, new construction methods and economic realities, and new social patterns.

Without this, we run the risk of continuing and expanding the anonymity and attendant self-focus of modern urban and suburban life styles, resulting in a population closeted in their homes and, when they emerge, being further isolated in their cars or their headphones. That self-focus, it can be argued, is the root of many of our political problems as well as our inability to deal with environmental issues, and is at least in part an outgrowth, a fault, of the physical structure of our non-communities.