I don’t like slogans, despite my lamenting the lack of good ones in the environmental world. Like analogies, they tend to oversimplify and convince with their catchiness. (Grammarians may note that I made a simile there between analogies and slogans. My high school English teachers would be proud.) Think of the slogan “guns don’t kill; people do.” Um, yeah, guns do kill. Or “America: Love it or Leave It.” That’s certainly not the only choice. 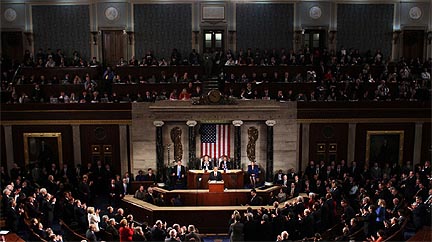 In his 2012 State of the Union address, President Obama said “This country needs an all-out, all-of-the-above strategy that develops every available source of American energy…” Image source: NPR

But I can come up with slogans, too. And in the sense of tit-for-tat, I propose a response to President Obama’s energy policy of “all of the above.” I suggest “none of the below.”  It’s both catchy and overly broad, so it fits the bill.

“All of the above” sounds, on the face of it, entirely reasonable.  In its inclusivity, it tries to appeal to everyone and it communicates a type of urgency by implying we can’t leave out any options. However it masks the fact (I’m tempted to err on the side of inclusion and call it a belief rather than a fact, but I’m no longer willing to concede that point) that several of the energy sources that get included in “the above” don’t deserve to be.

And, conveniently for sloganeers, the sources that ought not be included come not from above, but below. Specifically, I’m talking about energy sources that we procure from below ground. More specifically still, those would be fossil fuels: petroleum, gas and coal. Let’s contrast this with above ground sources: solar, wind and, with a bit of a stretch, hydro and tidal.

There are two primary differences between above and below sources. The belows are non-renewable  and carbon-producing. As we run out of them they will become increasingly difficult and expensive, and more environmentally destructive, to obtain while emitting more and more climate-disrupting carbon into the atmosphere.

“Above” sources, on the other hand, are constantly replenished and free. The sun doesn’t care how much of its energy we harvest. (Nor does the moon, the source of tidal energy.) And since they don’t involve combustion of carbon-based materials, they don’t increase atmospheric CO2.

“None of the below” is not a perfect slogan. Geothermal energy comes from below ground, yet doesn’t have the drawbacks of other subsurface sources. Nuclear power, a divisive topic even among environmentalists, would technically be a below ground source though it isn’t carbon intense. Its energy origin, however, lies in uranium, whose mining is an ecologically nasty industry.

As a slogan, the main problem, I think, with “none of the below” is that it sounds negative whereas “all of the above” has a positive, optimistic ring to it. (An ironic problem for EcoOptimism.) Perhaps then the trick lies in coopting the original, redefining what “above” means, as in something like “all of the truly above.” Or not. As I’ve asked before, where is the environmental world’s Frank Luntz?

I’ve also written that I am wary of metaphors because it seems there’s always a metaphor to “prove” any point.  Slogans, which tend to make heavy use of metaphors, have a similar liability, but they are indeed useful for quick – and, hopefully, not dirty – communication. So, like ‘em or not, we need a good one.