Are you what you own? And if so, does that mean designers — the people who think up most of the things you own – are in fact designing you?

A fascinating online discussion this past week has led me to ponder this question of designers’ roles and responsibilities – and limitations. The discussion began with the posting of an essay called “Designing Culture” by Colin McSwiggen, a postgrad student at the Royal College of Art in London. McSwiggen starts out by offering that one of the standard definitions of design (“Giving form to culture”) is “delusional. It seems to be gesturing toward the all-too-common notion that designers have some kind of sociocultural superpower: by shaping the physical objects that mediate and regulate people’s behaviors and interactions, they are shaping society itself!”

This, he says, is a vast overstatement of designer’s roles, “a classic credit-hogging move on the part of the design world’s plentiful narcissists,” because

The reality is that most designers work under some pretty heavy constraints: There’s a client or employer who gives them a mandate and makes the final call on what will actually be manufactured, printed or constructed. There are precedents set by existing designs that simultaneously inspire and circumscribe the designer’s work and limit the range of possibilities that clients and users will find acceptable. Finally, designed objects, spaces and images are frequently reinterpreted and repurposed by people who have no idea what the designer had in mind. In short, design is subject to the same limitations as any other so-called creative practice, and designers are no more authors than, well, authors are.

There are certainly elements of truth there. When I am designing someone’s home, I can’t (and wouldn’t want to) run unfettered with my own ideas because, well, there’s that client – who has interests and tastes of their own. 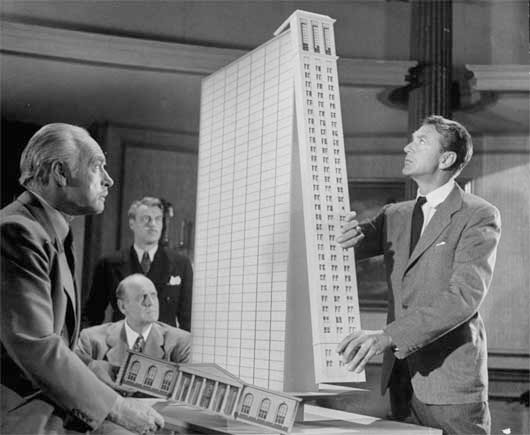 Who makes the design decisions? (Fictional architect Howard Roark altering his modern design at the request of his clients. Image from The Fountainhead, 1949)

Perhaps this is the difference, along with the pesky need for functionality, between an applied artist such as a designer or architect and a fine artist: the presence of a client or employer and – depending on how you view it – the limitations or opportunities in the accompanying constraints.

McSwiggen’s deflating of designers’ roles was picked up on by Cameron Tonkinwise who, until the summer was head of a program I teach in at Parsons (he’s now moved on to Carnegie Mellon and is missed here). He tweeted: “every idiot who leapt on then off the #designthinking bandwagon needs to read this.”

(I think Cameron’s digital outbursts of indignation are great and sorely needed, but when they are forced into Twitter’s length limitations they sometimes trend toward incomprehensibility in a language that I once called “websperanto.”)

McSwiggen goes on to write that the things we possess are an integral part of our cultural class definitions:

Without physical stuff to remind us of how we supposedly differ from one another, our hierarchies would be awfully ramshackle; stripped of our possessions, categories like “class” start to look like just a bunch of learned behaviors and confused ideas. Whether prohibitively priced cars, gendered garments, or separate schools for blacks and whites, social hierarchies are always maintained with the help of physical objects and spaces designed to reflect those hierarchies. Otherwise everyone’s claims of superiority and difference would be quite literally immaterial.

Cameron’s tweet about McSwiggen’s post in turn prompted Lloyd Alter of Treehugger.com (you with me still?) to post “Colin McSwiggen suggests that if [we] really had nothing, nobody would know who we are or what we stand for. Our stuff defines us.”

And therein lays, I think, a contradiction. (Sidenote: so long as I’m complimenting folks here, Lloyd is my singularly favorite eco-blogger, managing to post a range of incredibly relevant topics with a neat balance of acerbic insight and criticism. My opinion, of course, is wholly unprompted by his writing a great review of my book.) If physical objects define us, and designers design those objects, then something like the law of transitivity must apply here, resulting in “designers define us.”

But that’s not my real problem. It’s with the “stuff defines us part” and the idea that we become an indistinguishable mass of life without things to differentiate us. Now that’s probably an unfair exaggeration of what McSwiggen means, but even without hyperbole it strikes me as quite a cynical view of humanity. Yes, we live in a highly materialistic world – and that’s a topic very relevant to EcoOptimism — but I think the materialism is more about how we feel about ourselves than how we see others. A large part of materialism involves attempting to sate what we view as needs. Those needs are a result of the things available out there in the world (though perhaps not within reach) creating desire for them. It’s the combination of exposure via advertising and the breakdown of global distances enabled by the Internet, along with that old “keeping up with the Joneses” false sense of self-value. 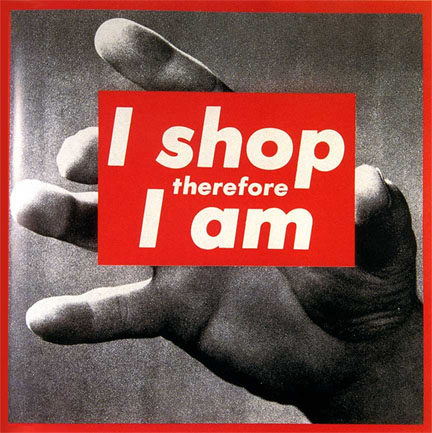 The differentiation McSwiggen is writing about, I think, is not as much about cultural classes as it is about self-image. Am I successful if I don’t have the things others do? Am I really defined by how new and large and flat my television is? Or what version number iPhone I’m using? (Not being a car owner and knowing virtually nothing about current models, I’m hard pressed to come up with a vehicular interpretation here.)

Either way — whether we’re talking about self-esteem or class differentiation — we come to the conclusion that objects have an effect on us, perhaps a profound effect. And those objects get designed by someone.  So an individual or a group is responsible for the emergence of those objects.

Does this mean designers determine what we are? Of course not. That would indeed constitute a “sociocultural superpower.”  But it’s an unavoidable fact that designers have at least a very significant role in determining what kinds of objects – electronics, buildings, clothes, plug-in air fresheners — are produced.  That role can be reactive or proactive.

In a model sustainable world, we would re-evaluate the real utility and real happiness that material objects lend us. This would lead to questioning what the things are that we really need and what the best ways to fulfill those needs are. The result could well be a dramatic change in the demand for various things.

Typically, designers would react to this, adapting as best they can to the new “market.” (Only occasionally are there visionaries such as Steve Jobs and his minions who create markets.) But reacting is not sufficient, given the role of designers in the development and emergence of material objects.  This is where the proactive part comes in. It’s also where the survival of designers emerges. In short, we have both a social and personal (if we are to have jobs and careers) responsibility to use our training and experience to participate in – if not lead – that re-evaluation of the purpose – the utility and joy — of material objects.

The re-evaluation process may in some cases lead to “dematerialization” where we (designers and users, for lack of a better term) conclude that some objects are in fact not desired. Which might lead to fewer design opportunities and, hence, fewer designers. And it presents designers with a bit of an existential dilemma: if we (designers) advocate dematerializing and owning fewer (but better?) things, as sustainability requires, are we talking ourselves out of jobs? Not if we take a larger view of designers’ roles. That view, which also happens to lead to the continued existence of design and designers, involves us having a leading part in imagining and advocating for things that are truly beneficial and enable us to thrive.

That doesn’t grant us sociocultural superpowers (or the accompanying egos). But designers do have some important abilities, most significantly to envision alternatives and, as I always emphasize with my students, to question our assumptions. When those abilities are combined with a realization of ethical responsibilities (and with other values like entrepreneurship), we get the potential for the inventions and reconceptions that can transform us not only from an unsustainable existence, but past a merely sustainable one and to a place where we flourish.