Science fiction has a habit of becoming fact. Star Trek’s communicator is perhaps the most renowned example. In a more recent one, Kim Stanley Robinson’s The Ministry for the Future opens with a devastating, deadly heat wave in India. Another of his books, New York 2140, takes place in a NYC flooded by rising sea levels, which is not yet an example. 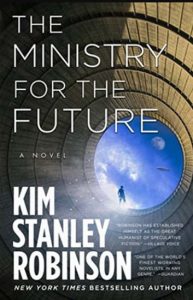 The Ministry for the Future is part of a growing genre of fiction
(for now) centered around climate change that’s been dubbed Cli-Fi.

Whereas the Star Trek communicator took 32 years (yes, I looked it up) to make a real-world flip phone appearance, Robinson’s India scenario took a mere two years, occurring even in the same location.

Sometimes science fiction scenarios are more about concepts than inventions or events. In Douglas Adams’ The Hitchhiker’s Guide to the Galaxy, the spaceship “Bistromath” was mysteriously made invisible by something called The Somebody Else’s Problem field. If you look it up in The Hitchhiker’s Guide to the Galaxy Wiki (because where else would you look it up?), you’ll find “An S.E.P. can run almost indefinitely … and is able to do so because it utilises a person’s natural tendency to ignore things they don’t easily accept.” 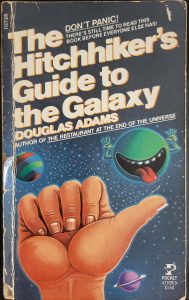 A famous phrase from The Hitchhiker’s Guide is “Don’t Panic.”
It could substitute for climate change deniers accusing
‘believers’ of being climate alarmists. (And, yes, this is my old beat up copy.)

Another fan site explains further that the S.E.P. field “relies on people’s natural disposition not to see anything they don’t want to, weren’t expecting, or can’t explain.”

The direct quote in The Hitchhikers Guide, in the expert words of Ford Prefect, says “An SEP is something we can’t see, or don’t see, or our brain doesn’t let us see, because we think that it’s somebody else’s problem.”

(The Ford Prefect, by the way, was a line of British cars in production until 1961, 17 years before the Hitchhiker radio show was broadcast. So maybe that constitutes a reverse of science fiction foretelling the real world.)

If you want a real-world application of the S.E.P. field, Wikipedia cites a 1976 article on bureaucratic inaction on low-income housing as an example of the principle of somebody else’s problem.

Climate change deniers have often employed something like this as one of their, perhaps unconscious, excuses. Something that we can’t see because we don’t want to is the equivalent of a child covering their ears and saying “I can’t hear you; I can’t hear you.”

If they can no longer maintain that it doesn’t exist – which is pretty difficult to argue in the face of record-breaking heatwaves around the world, record-breaking droughts, deadly floods and wildfires in places that have never had them – they can still ignore it because it’s something that happens to somebody else (unless they can’t water their expansive lawn in California, in which case it becomes a nuisance) or something that is caused by somebody else. “China produces more CO2 than the US does so why should we have to reduce ours.”

It’s not science fiction, but there’s another concept that comes into play here: confirmation bias. Psychology Today defines confirmation bias as something that happens “[w]hen people would like a certain idea or concept to be true, [so] they end up believing it to be true.” Trump’s “Big Lie” is, of course, an all-too-current example. 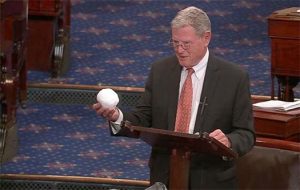 Senator James Inhofe using a snowball to confirm his bias

The S.E.P. field’s application was in allowing the ship to be invisible. Until very recently, the climate crisis had a built-in S.E.P. field in that its impacts were invisible. You can’t see CO2. Rising sea levels were merely a prediction. A global temperature change of 1o was imperceptible and sounds insignificant. Now, while you still can’t see CO2, its impacts are unavoidably visible. If they haven’t affected deniers directly, they can see it in the news. (Unless, of course, they only watch Fox News, which exists to promote conservative confirmation bias.)

Now that the impacts are visible, one would think that deniers’ S.E.P. fields would fail, that their cloaking device (to bring this back to Star Trek) had blown an EPS conduit or isolinear circuit or something. But confirmation bias is strong, especially in our severely polarized culture. What will it take to overcome it? How we turn deniers into alarmists? It’s a shame we don’t have Vulcan mindmelds to pull them out of their parallel universe.