Buried in the penultimate paragraph of an Elizabeth Kolbert piece in the July 23rd New Yorker – which starts out with the somewhat enticing line “Corn sex is difficult” – is a comment that deserves its own New Yorker article. (I’ll take suggestions for its opening line so long as they’re not X-rated.)

Kolbert writes “Both President Obama and Mitt Romney have chosen to remain silent on the issue [of climate change], presumably because they see it as just too big a bummer.” That summation is perfect evidence of the need to communicate EcoOptimism. What if climate change, along with the rest of our environmental issues, was seen as a great and patriotic opportunity to improve the bedraggled economy and simultaneously further the “American Way of Life?”

What if political races were competitions to see who could propose the equivalent of a war effort, as we discussed here?  We had a taste of that in the 60s, when on the left, Robert Kennedy said

[Gross National Product] measures neither our wit nor our courage; neither our wisdom nor our learning; neither our compassion nor our devotion to our country; it measures everything, in short, except that which makes life worthwhile. And it tells us everything about America except why we are proud that we are Americans.”

“the 1970s absolutely must be the years when America pays its debts to the past by reclaiming the purity of its air, its water, and our living environment. It is literally now or never.”

Whether he really meant this and whether he should be considered an environmental hero is debatable. (Though he signed the Clean Air Act Extension, the Clean Water Act was passed only over his veto.) But the point is he felt it politically valuable to at least give lip service to environmentalism.

In 1992, many of us were overjoyed that Al Gore, having just that year authored Earth in the Balance, was elected with Bill Clinton. Finally we had a knowledgeable and devoted advocate in the White House. But the topic of environmentalism virtually disappeared from the campaign and from the eight years of the Clinton/Gore administration. Even more disappointing, Gore rarely spoke of environmental topics in his 2000 presidential campaign. He was advised not to because it wasn’t a popular enough topic – it was a bummer. It was only when he was safely freed from polls – or perhaps from pollsters – that An Inconvenient Truth resurrected his reputation with us greenies.

And, of course, Kolbert is correct; you won’t find a significant environmental statement from either of the current presidential candidates. It was the Santa Barbara oil spill that, in part, prompted the 1972 Clean Water Act. No such advocacy or leadership emerged out of the Gulf of Mexico spill. 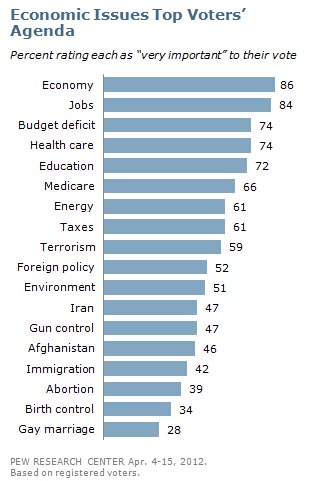 The usual explanation for this is that the environment is a low priority in the public’s list compared to the economy, the war and health. This raises a couple of topics. The first is that the public lack of support is, in part, a Catch-22. Politicians don’t put it on their agendas because they are told people aren’t interested. Then people think it’s not important because no one is talking about it. This is what’s known as a positive feedback loop. Too bad its effect isn’t so positive.

But what if the environment was seen as integrally tied to our other, more highly prioritized issues? That a solution to the Great Recession is tuning our economy – our consumption and materialism – to reflect what things actually cost and what things actually benefit us. That diminished expenses in the military and on health care would directly result from renewable energy and energy efficiency.

In response to my recent post Bouncing Back, a friend wrote “Without a carbon tax, you’re in fantasyland.” He’s probably right, but this doesn’t address how we get there. The source problem, I think, is not that we don’t have carbon pricing (I’d settle, by the way, for cap and dividend), but that carbon pricing is seen as an evil, a punishment, and a drag on the economy. THAT is the picture we need to change, and it’s what EcoOptimism is about.