Don’t buy me any gifts for the holiday season.

Not that you were planning to (I assume!), but that’s not the point. I’m “consumed,” as it were, by the quantity of things surrounding me and by emotions like garbage guilt. I look around at most of the stuff in store windows and catalogs, and realize that, not only do I not need most of it, I don’t even want a lot of it. Our place is full. If anything, we need to shed possessions. Clothes we rarely wear. Books we rarely read. (Why is it so hard to get rid of books?) Sentimental things we’ve been given but don’t know where to put. Unthinking things we’ve been given and would rather not find a place for.

I’m happy that we have no hamburger-patty-maker type kitchen appliances, and not only because we don’t have anywhere to store them.

When I look at those things, I can’t help it: I see all the materials and energy that went into making them, and I see the space indefinitely occupied in the landfills that they’ll end up in, often sooner rather than later. That’s what I mean by garbage guilt.

Yeah, I know that’s no way to look at a festive season, or at the well wishes and good intentions of those who give gifts. Bah humbug, Grinch and all that. But really I’m happy with – and prefer to have – those well wishes of my relatives and friends, just without the material encumbrances. Let’s have a meal or go to a movie together. Or send a donation to a charity.

Plus I’m picky and hard to buy for, but that’s another topic entirely. 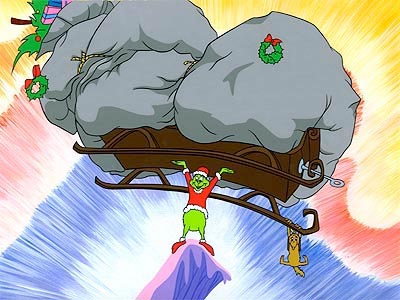 Our apartment is decent sized by NYC standards, though tiny, I’m sure, compared to many a suburban home. It’s certainly much larger than Graham Hill’s Life Edited apartment ten blocks away or many of the other micro digs featured these days in TreeHugger and Inhabitat. But it’s overflowing with stuff, as is our storage space crosstown. Factor in that I’d much rather be a minimalist, and it really doesn’t (or does!) add up.

And this is without venturing into the even more guilt ridden point that there are others who need things far more than I do. So I don’t think I’m being a killjoy in dampening the consumer wave.  (You know, the one that’s supposed to rescue the economy.) What’s the point in having (or being given) something you don’t need – or worse, don’t like? Actually, I think the concept is quite positive.

When you start looking at stuff this way, it quickly becomes a weight on your shoulders. I don’t want go all Buddhist or something on you, but I truly think I’d be happier with fewer material things. I’m not alone in that either. On Grist.org this week, a post is titled “Married father of two seeks Best Christmas Ever. No presents allowed.” But Greg (the author of the post) and I are apparently far from the norm. His idea was deemed so unusual that it warranted not one, but two, film crews and interviews.

Like Greg, I grew up with a mountain of gifts, piled in our case beneath a “Hannukah bush.” (In my teen years, we developed early eco traditions of using the Sunday “Funnies” for wrapping paper and buying live trees, which I would lug out the patio door and plant in the back yard on New Year’s Day – having dug the hole at Thanksgiving.) I remember not being able to sleep on the Christmas Eve when I strongly suspected there was a train set awaiting me on sawhorses in the basement. For theoretically Jewish kids, we made out great. Of course the holidays should be joyous for kids and gifts are part of that. But let it be things with meaning, not plastic throw-aways. I loved that train set and spent many a weekend building elaborate landscapes for it. There were many other gifts, though, whose longevity could be counted in hours.

Fortunately I don’t work in a company where we have Secret Santas. If I did, would it be acceptable for the wrapping to enclose a card acknowledging a charity donation? Or perhaps a gift certificate to a local business? I’d be plenty happy receiving either.

However, if you’re still unconvinced, there are of course things I covet. (That enlightened I’m not.)  But they tend to be expensive and electronic, so I’ll settle for a fun dinner at a local joint.

3 thoughts on “Here Comes the Stuff”