In the realm of happy coincidences, “The Story of Change,” the newest project from the folks who first brought us “The Story of Stuff,” was released the day after we launched the EcoOptimism blog.

For those who haven’t watched “The Story of Stuff,” I heartily recommend the twenty minute explanation of how our consumerist world works. You may find it a bit simplistic or a bit overbearing, but you won’t find it overly complicated. Or wrong. And you may come out a different type of person, what the narrator Annie Leonard calls a citizen rather than a consumer. 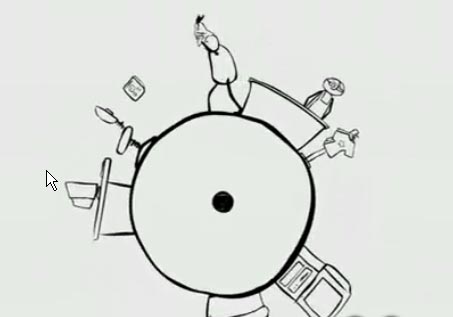 The “hedonic treadmill” illustrated in The Story of Stuff.

Upcoming posts will focus more on issues of consumerism and materialism. But “The Story of Change,” the newer video by Leonard, provides an excuse for me to explain a bit more what some of the goals of EcoOptimism are about.

Actually, let’s start with what it’s not about. Though I’m sure there will be exceptions, in general we’re not concentrating here on the bad news and the guilt. You can find that in plenty of places elsewhere. Rather, EcoOptimism looks more, well, optimistically and positively at the great win-win-win possibilities. Win #1 here is the economy. Win #2 is the environment and win #3 (never mind the order) is us, in the form of bettered, happier lives. And most significantly, these are not in opposition to each other, they are complementary. Down with the false dichotomy! (OK, so it’s not the catchiest of slogans.)

The main point of “The Story of Change” is in how change occurs, and the fact is it doesn’t just occur; it is made to occur. By people. In groups and individually. Leonard’s goal is to rally us and to show the various ways we can help make it occur by being investigators, communicators, builders, resisters, nurturers, and networkers. 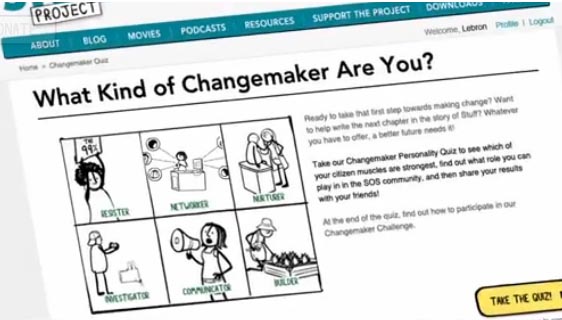 From The Story of Change

EcoOptimism is a little of all those things, but mostly a communicator. Leonard observes that the path to change may not be clear, and she concludes “The Story of Change” with a quote from Martin Luther King: “Faith is taking the first step even though you don’t see the whole staircase.” But we architects want to design things and I keep asking what that staircase looks like. What does that combined ecological-economic future look and feel like?

A growing number of folks are talking about what’s needed. They use terms like carbon-pricing, steady state economy, degrowth and externalities (and part of what we’re doing here is taking the jargon out of the picture, especially where the jargon works against the objective). EcoOptimism discusses a lot of these topics, but where I hope it will be different is in helping to visualize – to virtually experience in advance – what life in this win-win-win world can be.

Because that, I think, is where the case can be made and the argument won. An economist can go on and on about why we need carbon or congestion pricing, but unless that scenario viscerally grabs us, it’s so much verbiage. A planner can lament suburban sprawl, but so long as suburbia and cars are still seen as the idyllic American lifestyle, fighting it is going to be an uphill, probably unwinnable, battle. 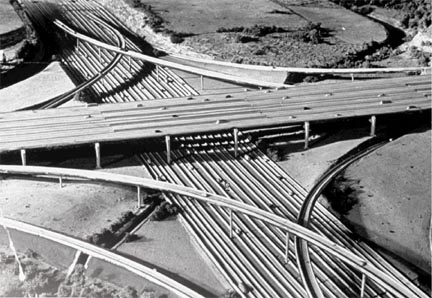 The irony of the vaunted “American way of life” of commuting from detached houses in suburbia is that it was created by exactly the kind of government intervention and social policy that conservatives now decry. Without tax deductions for mortgages and without the massive investment in highways and bridges (accompanied by disinvestment in mass transit), the great suburban exodus would not have occurred. Top image from GM’s Futurama exhibit at the 1939 New York World’s Fair. 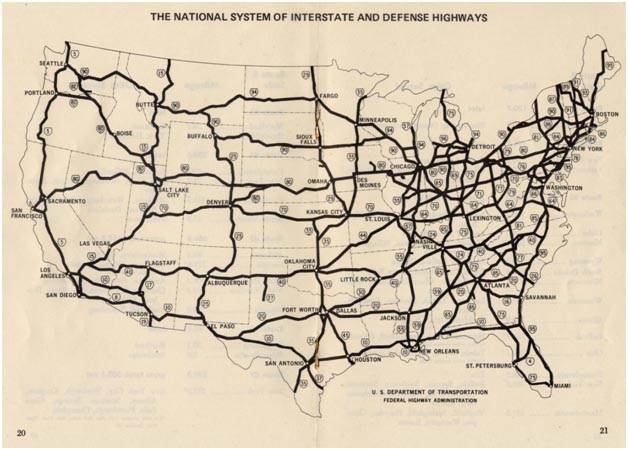 It’s hard to comprehend that the Interstate Highway System was begun just 56 years ago. Before then, commuting was unheard of unless there happened to be a passenger rail line nearby. Note that per the map title, this massive program, which literally paved the way for suburban expansion, was promoted on national defense grounds. Image source: Wikipedia Commons

As great and important as “The Story of Change” is, for me it still falls short in the same way that so many of the current books on growth do. Prosperity Without Growth, The End of Growth, Plenitude, eearth, et. al. all make great cases for the “new economy,” but leave me wondering how we get from here to there. And what life “there” looks like. Even if we all became advocates as Annie Leonard suggests – and don’t get me wrong, I think we should – most people will need something they can positively relate to. The concept of the new economy is still too abstract and, for many, frightening in the changes it engenders. It will take images and stories that are far more palpable (as well as appealing) to shake generations of cultivated, and therefore arguably false, ideals. We need to find those images and stories, or create them where they don’t yet exist.

I’ve no doubt “the truth is out there.” What we need to do is bring it here.