Wrongest Product Award nominations fall roughly into two categories. One is those in which the product itself is a contender: something that isn’t needed or perhaps goes about fulfilling a need using questionable materials or method. See banana slicers.  In the other category, the products themselves may be perfectly reasonable, but their packaging qualifies them as award fodder. More bananas, this time peeled and wrapped.

Coffee offers us examples of both. One could argue whether coffee is actually needed, but some would say much of the Western world’s productivity would be in jeopardy without it.  One wonders whether the debate could even occur without being fueled by caffeine.

More questionable might be the methods we utilize to fulfill the “need” for coffee. The way most coffee beans are grown and roasted, for example, causes a great deal of environmental and economic damage. A relatively easy solution, if you can remember all the criteria, is to buy organic, shade-grown, fair-trade, bird-friendly (am I leaving anything out?) beans.

That leaves us with packaging. Disposable coffee cups and lids have long been the scourge of the environmentally minded. The focus on them has gotten to the point where it’s no longer unusual for even non-Treehuggers to use refillable containers.

But a relatively new plague in the form of single-serving coffee pods has befallen us in the last 15 years. K-cups from Keurig were the original, but they’re now emulated by many other manufacturers. In case you haven’t seen them because you’re not one of the 10% of households that have them, they are all-in-one pre-packaged and sealed measures of coffee grounds for one cup with a filter built in. So all one has to do is drop the thing into the coffee maker, talk to your office mates for a minute (or to yourself if you work at home or are antisocial), and off you go, infused with new-found vitality, hopefully at least in a reusable cup. 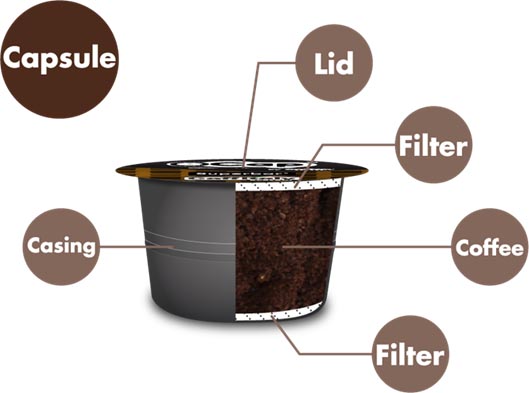 My first exposure to these was at a large brunch at a friend’s home where he went on at length about how great they were while several guests in succession made their own servings (and the trash piled up). I elected to not deflate his balloon with my ever-helpful greenie insights. 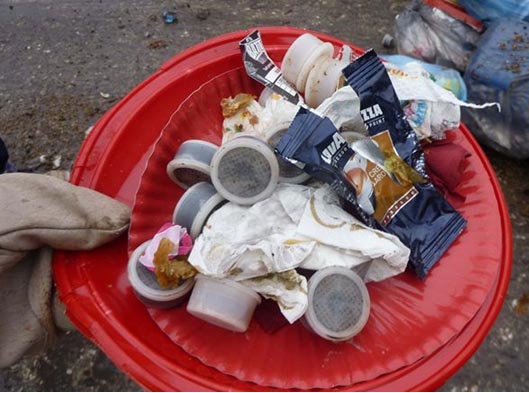 The problem, of course, is all that packaging. Eight of the pods comprise many times more material than would result from a standardly-brewed 8 cup pot of coffee (even one pod may be more compared to a pot brewed with a reusable filter), and the leftover is a difficult to recycle composite of things making up the vessel, the filter and the air seal, along with the used grounds.

A few recycling programs have been started, but they usually involve shipping the stuff long distances and then downcycling them into lesser materials. As my favorite cut-through-the-BS writer, Lloyd Alter, puts it “This is the worst kind of phoney feel-good environmental marketing, designed for the sole purpose of assuaging the guilt about consuming overpriced and unnecessary crap.”

(Or you can make batteries out of them.)

Refillable and reusable pods (mini filters, essentially) do exist, though I have a suspicion they’re encountered far less frequently than their sealed-for-freshness brethren. If I didn’t already have a coffee maker, I might even go that route for my own home and office where, for the most part, I’m the only consumer and brewing a pot can be a waste of water, electricity and beans. But I’d be sure to have locally-purchased, multi-hyphenate, politically and environmentally correct beans so all the bases are covered and my caffeine jitters can be offset by a peaceful conscience.

1 thought on “Jolts That Last Too Long”