With deference to Shakespeare, maybe we don’t kill all the lawyers. 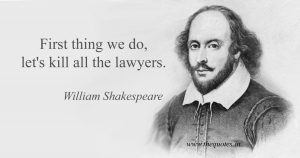 Despite the growingly alarming evidence and warnings, the needle has barely moved with either politicians or ‘civilians’ in terms of accepting and acting on the climate emergency. That would appear to leave us with the necessity of going beyond the court of public opinion and into the court of law. And that’s precisely what’s been happening. In earlier posts, we’ve documented some of this path in terms of lawsuits seeking to recognize the rights of nature and suits, in particular those by youth, alleging that their right to a future is being jeopardized by inaction. (here, here and here)

So, here’s a question and perhaps a way of looking at this. If shouting fire in a crowded theater is a crime (technically, whether it actually is a crime depends on some specifics), should it also be illegal to say there is no fire when in fact there is one? That’s exactly what Exxon did for years. They knew as early as 1981 that fossil fuels were connected to climate change yet spent decades denying it and funding thinktanks and researchers that promoted climate denial. Several states and New York City have sued Exxon Mobil for “lying to shareholders and to the public about the costs and consequences of climate change.” (It’s a move straight out of the tobacco industry’s playbook, i.e., “nothing to see here.”) The lawsuits have been unsuccessful to date, but I doubt the effort is over.

In that fire-in-a-theater example, one of the criteria for considering it a crime is whether that fire is a “clear and present danger.” Back when Exxon was busy denying what they knew to be true, maybe it was only a clear danger. Well, now it’s most definitely also a present danger as well.

I occasionally intersperse EcoOptimism posts with something I call “The Distillery.” These contain synopses of encouraging environmental news articles, often presented topically. I preface the series each time writing, “We can all use some positive news these days.”

Herewith, in the format of The Distillery, is an extensive compendium of news on the fronts of rights of people and rights of nature. The latter, by the way, often seeks to give nature rights equivalent to or similar to the rights of people, so associating these two approaches is not as unrelated as it might seem.

Given the number of legal actions (which, putting aside our short attention spans, is a good thing), I’ve kept the descriptions and commentary short. But you can always follow the links for more detailed info.

Also in the name of one of those annoying webspeak of the moment, TL:DR, I’ve organized this into categories of lawsuits:

I’ve written about environmental lawsuits in the name of nature’s rights. But they’ve usually been brought by people on behalf of nature. Renowned environmental writer Elizabeth Kolbert brings us the story of nature suing on its own behalf. As she notes and as we document below, this case is different. “Mary Jane’s case is a first. Never before has an inanimate slice of nature tried to defend its rights in an American courtroom.”

Her article, which is expansive in the style of The New Yorker, documents the history of nature having rights and suing for them going back half a century. In a Supreme Court case that ruled against nature, the dissenting view noted that ships and corporations are considered “legal personalities,” so nature should be viewed that way as well. That opinion also brings up a larger topic of corporations being defined as people. (Made infamous by Mitt Romney’s off-the-cuff statement “Corporations are people.”) The Supreme Court agreed in its ruling in the “Citizens United” case which, arguably, has ruined the American electoral system.

Photo credit: Florida Fish and Wildlife. [I found this image via “Reasons to be Cheerful,” a blog founded by musician, environmentalist and avid cyclist David Byrne.]

From The New Yorker:
April 11,2022
“A Lake in Florida Suing to Protect Itself”

And  a lot of other places are covering it, too:

From The Guardian:
May 1, 2021
“Streams and lakes have rights, a US county decided. Now they’re suing Florida”

From Reasons to be Cheerful:
April 22, 2022
“Does This Water Have Legal Rights?”

From Inhabitat:
May 4, 2021
“Florida waterways demand their rights”

In the New Yorker article, Kolbert has what, I think, is the most salient line: “In an effort to protect herself, Mary Jane is suing.” She adds, “There have also been several cases brought by entire species; for instance, the palila, a critically endangered bird, successfully sued Hawaii’s Department of Land and Natural Resources for allowing feral goats to graze on its last remaining bit of habitat.”

EcoOptimism’s take: The Mary Jane court case takes what might be a more direct route to establishing nature’s rights. Instead of people suing on behalf of nature, the plaintiffs in this suit – Boggy Branch, Wilde Cypress Branch, Lake Hart, Lake Mary Jane and Crosby Island Marsh – apparently are the waterways themselves. They are suing a developer whose project would destroy 63 plus acres of wetlands and 33 acres of streams.

Perhaps accompanying the movement to at least acknowledge if not recognize indigenous inhabitants’ claims to what was their ancestral land before colonialism, there is also a movement in the form of lawsuits to protect the ecology of those lands.

From Grist:
April 18, 2022
How rights of nature and wild rice could stop a pipeline

This builds on an 1837 treaty between the White Earth Band of Ojibwe and the U.S. government, adding in 2018 a law recognizing the rights of a local wild rice called Manoomin. Perhaps what’s interesting here is that, though the law has to do with the Ojibwe, it’s about the rights of the rice, not the Ojibwe. The lawsuit says the rice would be endangered by a pipeline that would run from Canada through the wild rice beds.

In the more traditional method of claiming nature has rights, there is a subset of legal actions brought by First Nations:

This case is a suit based on the rights of an American First Nation, the Sauk-Suiattle Tribe, but is back in the more traditional approach to asserting the rights of nature, The suit claims that the declining salmon population is the result of hydroelectric dams supplying the City of Seattle. 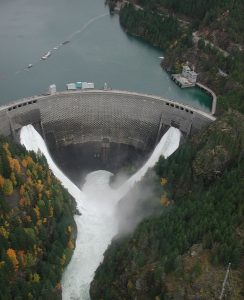 The Ross Dam on the Skagit River. Credit Wiki Commons

From National Geographic:
April 15, 2022
This Canadian river is now legally a person. It’s not the only one.

This National Geographic article first profiles the Magpie River on the lands of the Innu First Nation, which has been granted personhood, and then goes on to discuss the general movement granting rights to rivers globally.

Lawsuits Brought by the Next Generation: 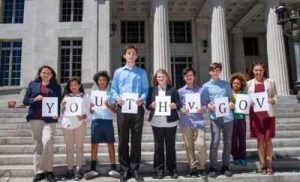 One of the challenging issues in fighting the climate crisis is that it hasn’t been (until now, maybe – cases in point wildfires, hurricanes, droughts) readily visible. In that sense, it may not affect the generations that created it, but will affect those following them. (I wrote about this concept, “intergenerational remote tyranny,” in an earlier post.) The lawsuit filed by a group of US children in 2015 has had many ups and downs but is still proceeding. This is by no means the first such suit. I wrote about several of them in a post back in 2017.

Many of the legal actions that are taken by youth allege that government policies – or, more accurately, the lack of them – endanger their futures. What that means is governments have abandoned what is arguably their most fundamental purpose: protecting their citizens.

EcoOptimism has looked at this, in particular with the post “Stealing from the Future.” 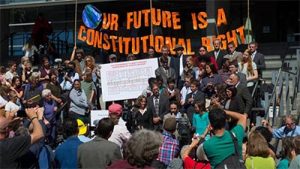 Seven young activists, led by a fifteen-year-old, are suing the state of Utah. The suit was filed with the assistance of Our Children’s Trust, the same organization that represented 21 youth in Juliana v. United States. Like that suit, this one says the issue is that the rights of this generation to a healthy and safe life have been unconstitutionally violated.

As I was about to post this article, in came an email from Our Children’s Trust announcing a new lawsuit:

We have huge news to share: 14 young people in Hawai‘i filed a new constitutional climate lawsuit today against the Hawai‘i Department of Transportation (HDOT), HDOT Director Jade Butay, Government David Ige, and the State of Hawai‘i! 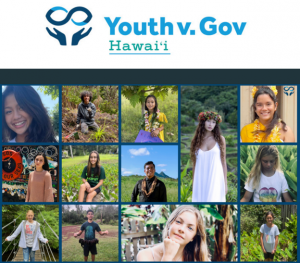 And from overseas, more lawsuits by youth:

This one’s a little older, but strikes a similar approach:

Suits against Big Oil have been wending their way through the courts in the US, with several state attorneys general  – and now some cities – leading the effort, though the literal jury is still out. But by the same token, this kind of suit is gaining more traction elsewhere.

From The Guardian:
June 1, 2021
“Shell’s historic loss in The Hague is a turning point in the fight against big oil”

Photo: Friends of the Earth Europe

From Grist:
May 25, 2021
“Can the ‘right to a healthy environment’ stop Exxon’s expansion in Guyana?”

From CNN:
Jan 14, 2021
“France taken to court over ‘climate inaction’ in landmark case” 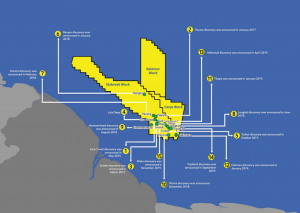 EcoOptimism’s take: This case is filed by an interesting combo of a Guyanese scientist and an indigenous youth. If you search ‘ExxonMobil in Guyana,’ you actually come up with an ExxonMobil site boasting about its operations and exploration off the coast there.

Perhaps the broadest move in this direction is the coining of the word ‘ecocide’ along with its legal definition. The draft of a new law, proposed by an international group of legal experts, says ecocide is “unlawful or wanton acts committed with knowledge that there is a substantial likelihood of severe and widespread or long-term damage to the environment being caused by those acts.”

From The Guardian:
June 22, 2021
“Legal experts worldwide draw up ‘historic’ definition of ecocide”

EcoOptimism’s take: I’m sure some will attack this as climate alarmism, but, well, they’re wrong. And it defies the core concept of EcoOptimism, but there are times when optimism needs to be put aside in order to make the point.

EcoOptimism’s overall take: Where politicians have failed us, spurred on by the clout and finances of industry, perhaps we need to bypass both. So, let’s not follow Shakespeare’s famous line. Turns out we need those lawyers.