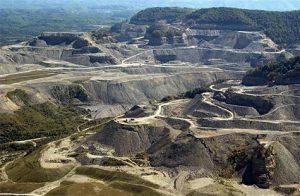 I’ve always been highly skeptical of the coal industry’s claims that the ecosystems of the mountains they blow up – because it’s a cheaper way to get to the coal veins – will be restored when they’re finished. But I’d be happy to be proved wrong.

This would seem to be at least partially the case in the example of this former mountaintop removal mining site in Kentucky, as profiled in The New York Times. In the images, it doesn’t exactly look like the verdant rolling forested hills that the mines decimated, but it is green and planted.

Back in 2010, a study by the NRDC supported my skepticism. But a 2017 post by the Yale School of the Environment’s blog profiled a more optimistic outlook in a program by Green Forest Work, who have planted nearly 4 million trees across more than 6,000 acres. That, though, is a non-profit project made necessary by the inaction of the coal mining industry in fulfilling their reclamation promises. 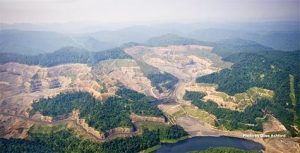 What’s perhaps more significant at the Kentucky project is the plan to build a solar farm on top of it. In true EcoOptimistic win-win-win fashion, this somewhat restores and gives a purpose back to this landscape, creates new jobs in an area with a declining industrial base – thus helping to show that eliminating coal-generated electricity is not an economy killer – and continues the path to convince remaining skeptics that renewable energy is a realistic alternative to fossil fuels.

It also reinforces my daydream of being able to somehow sit down with DINO and dinosaur Joe Manchin to show him the error of his ways, his misplaced view that he is protecting his coal miner constituents, or more likely his coal mining industry backers. As many others have questioned, is it really a misinformed altruism on behalf of hard-working voters or is it a result of his financial backing? In other words, is it people or fossil fuel interests that he thinks he is defending?

If it’s the latter – which is probable since, according to The Times again, “Manchin has received more campaign donations from the oil, coal and gas industries than any other senator in the current election cycle” –  well, that daydream of mine is rather more of a pipe dream. No logical argument will sway him away from the money. That’s despite the fact that those industries are a dying economic sector that no amount of climate denial and legal maneuvering will protect in the long run, and that he’d be doing those industries a favor by helping them redirect into renewable energy.

Then there’s Manchin’s recent statement that “the climate thing” is something “we probably can come to agreement much easier than anything else.” Whatever that means.

The question here is whether the replanting of destroyed mountaintops, accompanied by solar farms, legitimizes mountaintop removal mining. Does it pave the way to allowing more decimating of Appalachian ecosystems? It’s great to find locations for solar farms without displacing other uses or existing ecosystems. But it shouldn’t be used as the justification for more mining. 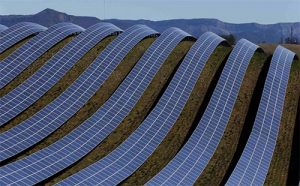 It’s more than a bit of a stretch, but if we imagine pitched roofs as a kind of artificial rolling geography, we can find another piece of win-win-win news in the continuing development of solar roof shingles. Tesla has been at this for a while, but there are horror stories of complications and unexpected costs. A roofing company (which Tesla isn’t) just announced its new product (also here), which it claims will obviate these issues. 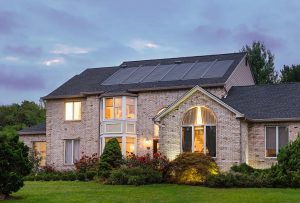 The idea of solar roof shingles is great. Why create a second layer on top of a roof when the solar panels can BE the roof? Adding conventional panels means paying for both the roof and the panels as well as adding weight and creating potential maintenance headaches. So combining them reduces costs and makes for an easier installation either when building a new roof or replacing an existing one. It also gets rid of those ugly panels. (That’s the third part, in this case, of the EcoOptimist win-win-win scenario.)

As with the solar panels on former coal mines, roofs are a logical choice for harvesting solar energy. (Airports and big box stores are, too.) The difference is that, with solar roof shingles, ecosystems aren’t being destroyed first.